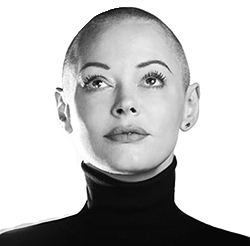 Women of the World have been waiting for this day; we have been working for it, since they came.

Rose McGowan and her #RoseArmy may have just changed Hollywood, forever.

This is an Herstorical moment!

ALL the voices, hashtags, posts, and tweets who found the fire to join the chorus of women who stood – bravely – in the critical spotlight of consciousness, helped to change the world as we know it.
What is now known, cannot be unknown.
Everything is Illuminated.

“It is harrowing to have people know my deepest pain, but fear cannot stop this national convo that needs to be had.” ~ Rose McGowan

Those of us putting ourselves out there, patiently waited for the moment we had sisters to stand alongside – it takes an army of women to be heard; you may have noticed.
Love straight-shot it, in 2005.
Some of us died waiting for this moment, giving everything we had, and leaving all we had behind; for every girl or woman lost to male-violence, we remember her in our Hearts. We work for justice and awareness, with Liberation as the ultimate goal.

“You are taking part of someone’s soul. It’s happened to me. It alters the course of your life; it’s altered the course of my life.” ~ Rose McGowan

“You should always take care of those sweeter and smaller than you are.” ~ Beasts of the Southern Wild

The Neptunian Magic-Mirror of Hollywood rules collective-consciousness; male-dominated, they’ve been stealing dreams, and implanting nightmares since the birth of the silverscreen.

For so long, all we’ve heard and seen, has been known as history; commonly referred to by witches as: “HIStory”: men’s stories. The Male Gaze.
If you know anything about astrology, you’ve been watching Pluto in Capricorn dismantle the patriarchy, brick-by-brick. By now, we’re about half-way through, and while many girls and women’s lives have been interrupted and interfered with, we have been working every day to break the spell of the patriarchy over the masses; it may have just happened. But not without effort. Not without a public anchor: Rose.

So whether you’re “sick of hearing about it”, or whatever. Tough.
Women deal with it everyday; keeping the story alive, and bringing it ALL the way home, to pedophilia and organised crime, is how it has to be. No more.
There are still many, many comments online from people who DON’T get it.

Galactic Centre is notorious for the astrology of Whistleblowers; Sagittarius burns with the truth. Often a foot-in-mouth sort of character. Sometimes, the voice of God/Goddess.
This place is the hand that turns our galaxy… the movement of this moment.

The Moon is about Womankind; the phases of womanhood, motherhood, childhood, and our Soul: the rhythm of life, itself. Period, period-blood. The Womb. It’s about home, sanctuary, intimacy, embodiment, and feelings. It is reflective – but on a mass scale, in a situation like this, we might simply say it’s about “Women”.

Lilith is about Independence from the Patriarchy, and crimes against women and children – she is untameable. She has been demonised by you-know-who.
Once the war is over, she is pure, primal, uninhibited creative and sexual expression.
These days, she is known as a dark-goddess no-one wants to touch. The buried one. Silenced, yet screaming if you are pushed too far away from life, and can hear her at the ends of the earth. Caged. Misrepresented. Erased, almost.
There is an image, here, that reminds me of what she is.  The first image.

The Voice of the Universe is *literally* speaking through Rose, right now, because Galactic Centre is presently being *activated* by Transiting Lilith, herself, and Transiting Saturn; which aids in manifesting Lilith’s authority, embodiment, and voice.
This is Mature Lilith.
Real Lilith.
When all the women started speaking up about the TRUTH behind the Hollywood Mirror, I commented that I could hear “Lilith conjunct Galactic Centre”… I got a thrill.
Lilith/Saturn and Galactic Centre are also getting a little *electrifried* by a trine from revolutionary Uranus in Aries, and, as part of a GRAND FIRE TRINE with the North Node in Leo, Destiny is involved. Our future is here. Our moment has arrived – if we keep the spotlight ON.

Other notable astrology of the moment is Jupiter just switching over to Scorpio – Jupiter is BIG, and EDUCATIONAL, and Scorpio is sexual, deep, power-engaged, and mysterious… combine the two.
Jupiter in Scorpio is ruled by soothsayer, Sagittarius, so as the Cosmic-Clock moves, so too, will the story of earth: stay present, and engaged in your Truth and your Mystery.
You might even *shock* yourself!
Jupiter in Scorpio is also influenced by Pluto, who is in Capricorn: this astrological coming-of-age is HUGE.
Saturn activates Galactic Centre only every thirty years.

And a shorter, yet *active* transit of the last few days, is MARS (sexuality, passion, strength) opposite CHIRON (#ouch).

And an ever shorter astrological moment, is Venus conjunct SUPER Galactic centre; this one is from late-Virgo to early Libra. Venus here, has the deepest Heart: she’s a Healer of galactic proportions.
Mars is slowly but surely on his way there. Any day, now.

Revolutionary Rose is also about to have her Lilith Return, and Saturn transit her Moon.
Sister-witch Alyssa Milano has her Sun conjunct Galactic Centre; Alyssa started the hashtag #MeToo on twitter, so the world could see the Truth.
So the world could Witness.

Alyssa’s the Light. Rose is the Night.
Both of them are having Lilith and Saturn come round for a visit…

What this astrology means for Rose, is that she is literally the EMBODIMENT of the TRUTH of NOW. When Saturn hits her Moon, this can be a challenging time, emotionally, OR, she may just get realer.
Stronger.

Ronan Farrow – who illuminated Rose’s story, worldwide – has Galactic Centre Rising; he is the Dawn of the Truth.

During my Lilith Return, I wrote this: although I hate the powerless image the editor chose to accompany it. Very *soft*, small, and *non-threatening*.
I had no intention of being “threatening” – only real.

Alls I know, is that Rose is embodying her Destiny: Capricorn North Node gets shit done. It’s the Chief.

North Node on the cusp of the 8th House: she’ll make a powerful boss. An excellent investigator and dismantler of the patriarchy, as she reclaims female power from its ruins.

Goddess (Lilith) vs The Patriarchy (Saturn)

She’s an apocalypse.
Oh yeah; and her Venus is tightly conjunct Uranus. She’s so unusual… 😉 Definitely a female revolutionary. An ingenious Venus. Artistic, Awakening.
“Shocking Pink” – I think she once said…

Some of the numerous women who have been working behind the scenes, over the years often go unnoticed, and unnamed; we have to build communities and work together to make change real, otherwise the Patriarchy wins: when it Divides, it Conquers.

At the roots of #MeToo, we have its Creatrix: Tarana Burke.
She worked in the shadows until her message was amplified, starting #MeToo in 2006, which were words she felt she to failed to say when the moment counted; so she made them count for the rest of her life.
Like Rose, Tarana is a Virgo; a Healer, a Priestess, a Goddess.
Like Rose, she also has Capricorn North Node, making her a great chief.
More outstanding, is that Tarana’s North Node is conjunct Lilith in the Saturn-Ruled Sign of Capricorn, just on the outskirts of a hot conjunction with Galactic Centre.
Capricorn is the business-end of Galactic Centre; getting shit done. Being a boss, and creating structure for changes in the real world.

Tarana Burke has Lilith conjunct her North Node, just on the outskirts of Galactic Centre, which spans late-Sagittarius – early Capricorn.

THIS HAS BEEN A DIVINE TEAM EFFORT, FROM EVERY WOMAN WHO DIDN’T KEEP HER MOUTH SHUT ABOUT ABUSE.

Oh yeah; Lilith is conjunct my North Node, too. In Virgo.

This entry was posted on October 16, 2017 by Iris. It was filed under Evolution, Relationships, Spirituality, Uncategorized and was tagged with #RoseArmy #MeToo #Lilith #Saturn #Astrology #Sagittarius #GalacticCentre #Truth #Herstory #Venus #Women #OneBillionRising.